You can find me at https://www.goodreads.com/user/show/3144945-alex - I do not update this site anymore. Hey, it's a whole book about one of my favorite books! Which, okay, so what? Man, I was talking about how much I like Wilkie Collins the other day, and some dude was like oh hey then you should read Dan Simmons' [b:Drood,|3222979|Drood|Dan Simmons|https://d202m5krfqbpi5.cloudfront.net/books/1344270075s/3222979.jpg|3257056] because Collins is in that, and here's the thing: this dude hadn't read Wilkie Collins. (Or Dickens, for that matter.) So shut up, right? Go read Wilkie Collins! Why would you suggest a book about a made up version of an author I like? Why would I not just read the actual thing? This happens to me all the time with [a:Jasper Fforde,|4432|Jasper Fforde|https://d202m5krfqbpi5.cloudfront.net/authors/1350497674p2/4432.jpg] too - people are all "Hey, you like classics, you'll love Jasper Fforde." But that doesn't follow! I didn't say I liked books about classics! I said I like classics! Why don't you recommend a classic to me instead?

I did eventually read Jasper Fforde. It was okay.

But this is nonfiction, so that's much better. And I do think that for our most towering works, which Middlemarch certainly is, it's rewarding to read books about the books. But generally I want them to provide context and deeper insight into the books, not just...a totally different story that mentions the books. So this might be a good idea in a few years, when I reread Middlemarch.
Tweet Cryptonomicon is one of those plotty books, where things happen and then other things happen, which isn't really a knock: some of the best books ever are plotty. Lookin' at you, [b:The Count of Monte Cristo.|7126|The Count of Monte Cristo|Alexandre Dumas|https://d202m5krfqbpi5.cloudfront.net/books/1309203605s/7126.jpg|391568] But when you write a book about a bunch of stuff happening, it succeeds based on whether all the things that happen feel like part of a whole - whether all the threads come together. Again, Count of Monte Cristo is forever the gold standard for books like this. At their best, these books are tremendous jigsaw puzzles: a successful one is a masterpiece of planning ahead, and authors like Dumas - or George Eliot, whose [b:Middlemarch|19089|Middlemarch|George Eliot|https://d202m5krfqbpi5.cloudfront.net/books/1309202283s/19089.jpg|1461747] combines the best of plottiness and the best of character analysis - take your breath away when you realize how carefully they've set up each strand of plot.

Cryptonomicon succeeds at this. Stephenson throws a lot of balls in the air; the story spans sixty years, from World War II to the late 90s, and spans the globe from some made-up country near England to the Phillipines, with plenty of stops in between, and he totally pulls it off. It's an impressive feat, and I can't poke a single hole in it. Nice work, Neal!

Of course, while insight into human nature isn't necessarily necessary in a plotty book, it helps to have some. Count of Monte Cristo includes some wicked heavy and smart thinking about fate and control; Middlemarch is one of the most psychologically astute books ever written. And Cryptonomicon isn't really a smash success on that front. There are some cool characters, like uber-Marine Bobby Shaftoe, but basically these are just people who do things.

And it has to be said that Stephenson appears to have little or no grasp on how women operate. He clearly likes women - this isn't a misogynist book - I'm just not sure he's met very many of them.

Which kinda ties into why I didn't totally love this book. It's impressively put together, but it's...well, I was reminded of David Foster Wallace very often; same conversational tone, same exceptional technical intelligence - but Stephenson is - how do I say this? - he's just not very cool. Which I know, you're like "Wait, you're comparing someone's coolness unfavorably to DFW? DFW wasn't exactly the coolest kid on the block, y'know." But he was! He wouldn't have said so, but he totally was cool.

Maybe I can say it like this: DFW was a geek; Stephenson is a nerd.

So this is a nerd epic. It succeeds at what it wants to be. I enjoyed it. I didn't love it.
Tweet

The Rise of Modern China Judkins rec for Chinese history survey. The problem with surveys of places like "China" is that they're fucking long.
Tweet Another Judkins rec for Chinese history surveys. I know this book; it gets a lot of ups.
Tweet Some of the things science fiction writers tend to do irritate me. They make up words, they throw gee-whiz laser guns in when they don't add to the story, and they're more prone to eye-rolling love stories than genre-less fiction.

And here's Neuromancer totally doing every one of those things, but for some reason I don't mind it here.

I'm not totally sure why. It starts with Gibson being a very good writer, certainly. And the heavy noir influence certainly doesn't hurt. But aside from that, I don't know, maybe I was just in a good mood this week.

I didn't find the technology badly dated, largely because Gibson doesn't really even try. His descriptions of hacking are more metaphorical than predictive; he understands that, whatever, I guess you write some codes or something, but after that he basically describes acid trips and lets that be the end of it, so what are you gonna argue about?

I'm not gonna go rushing out to find the rest of this series - it's still sci-fi, after all - but this is some of my favorite sci-fi. I dig it.
Tweet I almost didn't give this a star rating. Tough to know how to judge a book like this.

When I was a kid I blasted through all of these books one summer, and came away with a lifelong automatic crush on any woman who has strawberry blonde hair. Which, btw, she doesn't even have in this first book, it's just blonde. I looked it up and apparently her hair color evolved. Two stars for blonde hair.

This is a children's book, written at a very basic level. I don't know, eight-year-olds? Whatever the stage is where kids start reading chapter books. It'll have some unusual words - I think I remember seeing "demure" - but nothing showy.

I feel like anyone seriously reading this review wants to know if it's okay for your kid, so: yes. This is the 1959 rewrite, not the original 1930 version which I couldn't find, so I can't speak tot hat one, but this rewrite has no objectionable material. There are no people of color to be weird and racist about, and no boys Nancy's age at all. Nancy pointedly knows how to change a tire and fix a boat motor, which is cool; she has agency and she's a very nice young lady. She makes a good role model.

I liked it. I mean, it's just like Nancy Drew ambling about making friends with people and then doing nice things for them, and in the end she fixes everything. The mean girls in her class get it pretty rough - like, now they're poor and they have to get jobs and it's a bummer for them - but they're very unkind people, so whatevs.

I mean, there's no reason to read this as an adult other than nostalgia. If you're, like, into these books, you probably collect old Barbies and whatever weird shit you're into as well, and I definitely feel smugly superior to you, over here with my Steinbeck. But go ahead and give it to your kid. There are worse fetishes to have than strawberry blonde hair. Well, this is going to be a pain in the ass to get my hands on.
Tweet Seneca takes on Euripides' Hippolytos, and then later on Racine does it too. Neato.
Tweet This is basically a mystery, and mysteries live or die based on their final acts, and this is a super wack final act.

For like the first 90 percent, Banks does a pretty fair job here. He sets up a bunch of intriguing questions:

- When and how is the brother coming back?
- Why is this kid such a psycho?
- How did both of these kids end up psychos?
- What's in the study?
- Holy shit, did that kid say he killed three other kids?
- What's the wasp factory?

He doles out some answers at a good clip, so you're kept entertained. And the protagonist's voice is original and interesting: a scary smart little whackjob who's constructed an elaborate fantasy world in his isolated Scottish surroundings, with long-standing political feuds and alliances(him v. bunnies; him v. birds) and some sort of religious system.

But you're still wondering about the basic question: how did this kid happen? And the answer to that question is stupid. He's a lady? That's the reveal? And if I'm following this flood of malarkey at the end, he turned into a psycho killer because his feminine soul overcorrected in its attempt to conform to masculinity? Seriously? That is super fucking dumb, dude. It's dumb intellectually, for one thing: gender dysmorphia, which is I guess what this sortof is, doesn't lead in any logical way to lighting bunnies on fire. It leaves the fact that both brothers are murderously insane as more or less a coincidence, for another. And finally, even granting the ending, there haven't been enough hints to make it a satisfying reveal. A good mystery presents a sudden explanation for a number of clues; there have not been good clues here. Yeah, a brief mention of the kid being unhappy with his body, and the fact that his brother occasionally cross-dressed for cloudy reasons, but nothing that logically leads to this.

It's a deus ex vagina, and this book is dumb.
Tweet Don't forget to read this! Sera says it's balls.
Tweet 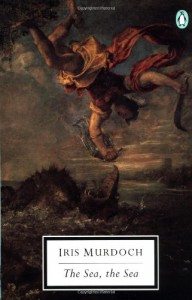 Here's the first thing I love about [b:The Sea, The Sea:|11229|The Sea, the Sea|Iris Murdoch|http://d202m5krfqbpi5.cloudfront.net/books/1302898449s/11229.jpg|1410491] its title. Isn't it wonderful? Imagine how boring it would have looked on a shelf if it had just been called "The Sea." But with that profoundly simple decision to repeat itself, it suddenly drips horror and madness and obsession. It's just brilliant. Almost makes me wish Emily Bronte had called her book "The Moor, The Moor."

And then Murdoch plays this terrific game with the opening sentence:

The sea which lies before me as I write glows rather than sparkles in the bland May sunshine.

Which is the boring first sentence of a book that should be called "The Sea." It even says "bland"! Blahhhh, lame, until you get to the next paragraph:

I had written the above, destined to be the opening paragraph of my memoirs, when something happened which was so extraordinary and so horrible that I cannot bring myself to describe it even now after an interval of time and although a possible, though not totally reassuring, explanation has occurred to me.

And there's the first sentence of a book called "The Sea, The Sea." Whee! Off we go, madness and horror. Clearly I should read this as a double feature with his dad's Faust book.
Tweet
next »